A Time of Change

If I had to give some advice to the incoming freshmen, I’d say: Find your niche. Whether it be a sport that you’ve never even thought of or a club you’ve never heard of. Audition for a musical you’ve never seen, a part you’ve never dreamed possible and maybe, just maybe, join a dorky team of newscasters for the morning announcements.

I can say that my freshmen year, I was confused and depressed. No matter how much I tried to impress people they just seemed to brush me off as ‘just another freshman.’ The beginning of my sophomore year, I had the same problem. It was the beginning of second semester that I just got tired of ‘impressing’ people. Before I knew it, people invited me places, I fell into a good group of friends, and I became truly happy. You just have to remember that people in high school aren’t impressed with the shoes you wear or the places you’ve gone, but the value and character that you possess. Not only were my grades climbing back up from the pit called procrastination, but if I ever needed help, I had a group to rely on.

This year, junior year, has been the most unforgettable for better and worse. In the negative end, I can say that no matter how much planning I had done to prepare for college my sophomore year, the reality that one day I would be living on my own in a world that I could only hope would be kind, was staring me right in the face in the form of the ACT, guidance counselors and the taunting letters from prospective colleges.

Somehow, I pushed through along with the rest of the juniors. However, we are about to face a new challenge. Saying goodbye isn’t an easy thing to do, but we have come to realize that by saying goodbye to the class of 2014, we are just that much closer to saying goodbye to each other.

The quirky ginger friend of mine and her German side-kick are going off to live their lives. One is going to college and one is going back to her homeland Deutschland (Germany) to continue her high school education. I’ve gone travelling with them, I’ve grown close to both of their family members and it’s really hard to imagine a day, let alone a year, without either of them. Though I’ll always have those memories to cherish like jet skiing on a lake with another German foreign exchange student, being served dinner by a guy with a Romanian accent and ten other people or ‘jumping around’ with the 2014 graduating class of UW Madison, it won’t be the same.

I know I’m not alone in saying goodbye to good friends. Maddy has told me that she cried for five hours when her upperclassmen friends graduated, but she grew stronger because of it. I can only hope that I’m just as lucky as she.

My friend Katie Malchow has pushed me through my rough times and pushed me to do my best. Going into next year, I can genuinely say that she has made a positive impact of my life. Stepping into the class of 2014’s shoes isn’t going to be easy, but I can only hope that I can be as great of a friend to the other students like Laura, Maddy and Katie have been for me.

I have a theory that life leaves you clues to what’s to come. In AP Psychology we learned about the five stages of death and dying. First there’s denial, secondly anger, thirdly bargaining, fourthly depression and lastly acceptance. This doesn’t only relate to death and dying, but instead all aspects of life.

At first I was in denial that I would be a senior and that the greatest friends I’ve ever known would leave. Secondly, I have to admit that I was angry that I wouldn’t be able to see my friends everyday. I was angry that my life would be determined by a test score. I was angry that life was moving on just as it should be. Thirdly, I bargained with the world to give me a couple of months more to be stressed about preparing for college. I just wanted a couple of months more with my friends and newfound family. Lastly, I can say that depression and acceptance are coming together hand-in-hand.

As finals wrap up, I’m realizing that my upperclassmen friends are ready to move on. I realized that the halls of the school are just going to become more and more boring to me. The teachers are going to keep telling the same stories about college life. I realized that time moves on and the only advice I can give to anyone is to embrace the future with warm courage and high hope. Be ready for your time to come.

So as the gates of the senior hall open up to the class of 2015, the only thing we have to be concerned about is one question. Are we ready for it? 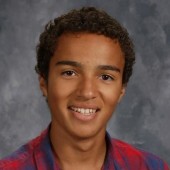 Seniors, freshman look back at first and last