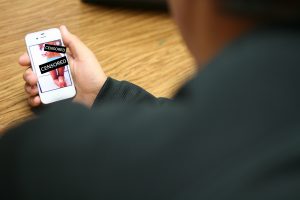 With the growing use of technology, teens sending provocative photos to their peers has become a growing problem.

“I really in my heart don’t believe that taking the pictures off the phone is any different than in my generation. People would take pictures with their camera and then send the pictures to possible people that they are interested in. It’s so much more easily done now in a quick, technology-convenient way that I don’t think people understand the true possible consequences because it is more of a spontaneous type of action,” said high school counselor Susan Leadholm.

High School Psychology teacher Tony Boerger believes that this new phenomenon has to do with Maslow’s pyramid of needs; the need to belong is one of the reasons people are sending nude photos. As if by doing this, they think that somebody will be more likely to accept them.

“[Students think that] if I send it, it’s going to be gone in 10 seconds, then people figured out pretty quickly how to screenshot it. Students still feel that because of the premise behind Snapchat, they feel that it’s not as bad because the person is supposed to let it disappear in 10 seconds,” said Knipe.

Even though photos through Snapchat are suppose to erase after 10 seconds, people are finding that this isn’t always the case. Boerger believes that nothing goes forever that simply.

“I know that Snapchat isn’t like Facebook or Twitter where it has a feed that constantly goes, but nothing that’s ever posted disintegrates. Anybody who knows enough about it can access those things. Once you put it out there, it’s out there, in some form forever,” said Boerger.

Leadholm has personally had to educate numerous students about the legality and that it truly is sending child pornography, even if it is of yourself.

“Individuals can get in trouble because that becomes a public document  now because of the way that the internet and the way that the whole security and different technology works. I mean people think that a snapchat is going to disappear, but you can screenshot that and then it becomes something that people can save. I think that people know it intellectually, but I don’t think that at that time they’re thinking someone’s going to keep this and possibly use it for a bad situation,” said Leadholm.

Knipe feels that there are many consequences to sending these revealing photos to others that students are not considering.

“I think because they know or they think that so many other people are doing it, to them it seems ok, even though they know it’s wrong,” said Knipe.

Boerger believes that one of the consequences is having the photo talked about and shared with other people; more so with males.

“Sexual talk is much more acceptable with guys, there aren’t limits on it. Guys usually don’t say ‘Oh that was too far’ or ‘That was too much information’. I’m guessing guys are pretty free about sharing them with each other,” said Boerger.

Gilbertson believes that a consequence of this impulsive action is embarrassment.

“Technically it could be, in a relationship point of view, it could be sexual harassment, it could be peer pressure, or it could be lack of self-esteem. A lot of times it’s a controlling behavior, so there are probably some issues of abuse stemming from it.  It’s not a healthy relationship because of the fact that there really should be no need to take those kinds of pictures,” said Gilbertson.

Not only can there be embarrassment associated with these types of actions, but Knipe believes that a lot of bullying stems from this.

“There’s incidents where students have actually committed suicide because a girl will send a picture to her boyfriend. The boyfriend will send it to people, and they’ll send it on to other people. Pretty soon there’s a ton of people that have seen this picture and then the person’s being harassed, this person is extremely embarrassed, and sometimes can lead to suicide or extreme things like self-harm,” said Knipe.

Boerger worries that  people don’t realize what the person they sent it to could do with that photo and the message that you are sending with it.

“When you’re sending it, [you] see it as something innocent, but the person receiving it sees it as an invitation. Maybe later, that person did not mean it that way. It could lead to assault or to rape. I’m not saying that you invited it, I don’t believe that; you always have the right to say no, but now somebody expects something that they shouldn’t,” said Boerger.

One of the biggest consequences of sending provocative photos that is overlooked are the legal consequences. Knipe said that it really depends on the state. In the state of Wisconsin, there are no sexting laws and nothing specific to sending pictures or text messaging.

“What is happening with most of these students is they are being taken to juvenile court. They are being put on parole, they are having different consequences for their actions just through the juvenile courts, but like I said, it can definitely go a lot farther than that based on that. That’s just for minors.  If there’s a student that’s a senior, who is 18 or older, the consequences can be worse than the $25,000 fine and the 12 ½ years in prison,” said Knipe.

Knowing these negative outcomes of sending such inappropriate pictures, there are questions as to why students still perform these acts. Gilbertson believes that it stems from self-respect. Not only that, but there is a lot of power involved with the sending of these photos.

“When somebody has that power over you,  a lot of times they will hold you in a relationship and make you feel like if you don’t do it, then something’s going to happen. There’s no longer an equal platform no matter what; if it’s male versus female.  Regardless, there’s a power struggle there of some sort. Then there’s all the idea that sooner or later they can use it against you,” said Gilbertson.

Boerger believes that this is because teens aren’t as mature as adults. That as an adult you have better judgement and that you understand more about the consequences.

“That kind of fits in with Kohlberg’s Moral Development, that when you’re more of a mid adolescent you don’t think as much about consequences and intentions,” said Boerger.

Knipe thinks that teens would be very shocked if they saw research for themselves and what the potential consequences could be.

“I think that a lot of people are getting away with it, so in their heads, they’re thinking that they aren’t going to get in trouble for this, because this person and this person got away with it. Anytime those pictures end up in the wrong hands, there’s a really good chance that there’s going to be some bad consequences that a person didn’t plan on or even realized were there,” said Knipe.

Gilbertson believes that  if you want a healthy relationship or you’re in a relationship with somebody, you should feel no need to do that. You’re making a decision that is affecting your whole life and it takes 20 seconds to make.

Leadholm hopes that students understand that they don’t need to do these kinds of acts to get other’s attention.

“As a mother, I would feel very badly if I thought that my daughters or my son, for that matter, need to do something like this to get the attention of someone else. I would really hope that their own cool personality and that their outgoing, energetic disposition would catch people’s eye,” said Leadholm. 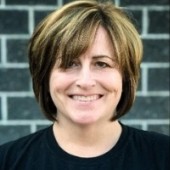